To share your memory on the wall of Charlotte Holcomb, sign in using one of the following options:

Receive notifications about information and event scheduling for Charlotte

We encourage you to share your most beloved memories of Charlotte here, so that the family and other loved ones can always see it. You can upload cherished photographs, or share your favorite stories, and can even comment on those shared by others.

Posted Jun 22, 2020 at 06:12am
Dear Gene, Gayle, Cheryl and Lisa. ..Gina was one of the sweetest, kindest and caring ladies I’ve ever known ...she was also a lady whom my mother dearly loved since their early schooldays in HDG ..she will be greatly missed ..I hope all of you are doing fine. Best Regards, Gary
Comment Share
Share via:
GH

Dear Gary, thank you for your kind words. My Mom spoke often of her friendship with your Mom, Betty and how much she missed her. Mom was so glad to see your Dad this past Christmas as we were shopping at Macy's.
KH

Posted Jun 16, 2020 at 11:16am
To the Holcomb family, Im so very sorry for your loss! Prayers and sympathy to the family! Karen Hubble
Comment Share
Share via:
LH

Karen - Thank you for your kind words.
CH

Posted Jun 12, 2020 at 08:37pm
It is with great sorrow that I say goodbye to my sweet and loving Aunt Virginia. When I younger I had the opportunity to be with my Aunt and family weekly as we gathered at grandma's or great Aunt Verna's house. She was loving, intelligent, dedicated, wise, and a great mentor. As an adult, life became busy, we did not see each other as often, but she was always there, with a smile, a helping hand, and a kind word. Her deep dedication to family was an intricate part of her everyday life which I experienced and witnessed many, many times. She was a true and faithful servant of the Lord, she walked the walk. Praying for peace for Uncle Gene, Gayle, Cheryl, Lisa and the whole family.
Comment Share
Share via:
CS

Thank you, Cindy for your kind words.
SP

Posted Jun 12, 2020 at 07:40pm
To my dear friend Gayle and to Lisa, Sheryl, and Mr. Holcomb: I’m so sorry to hear about your loss. I know you will miss her terribly. “And then I heard the angel say, ‘She’s with you every day’.” Susanne Prigge
Comment Share
Share via:
GH

Dear Susanne, Thank you for your kind words. Everyday, we will see something that reminds us of Mom. Some will bring a tear, while others a smile.
RS

Posted Jun 12, 2020 at 04:24pm
Cheryl
I am so sorry for your loss. My thoughts and prayers are with you and your family.
Becky Stout (Barben)
Comment Share
Share via:
CS

Thank you for your kind words. 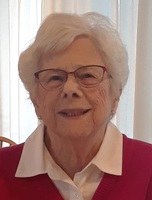 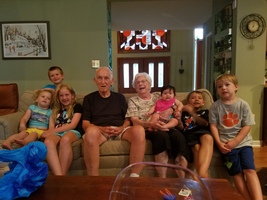 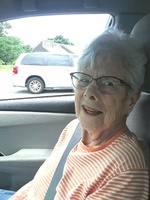