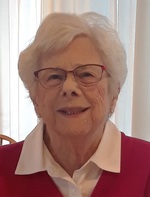 Charlotte Virginia Holcomb, 88, of Churchville, MD, surrounded by family, she peacefully passed away in her home, on June 10, 2020. Mrs. Holcomb born November 30, 1931 in Havre de Grace, MD, was the daughter of the late Wilbur S. Ervin, Sr., and Annie L. Crawford Ervin, sister of the late Wilbur S. Ervin, Jr. and is survived by her brother Crawford L. Ervin of Catonsville, MD.
Virginia, as she was known to all, lived her life to the fullest enjoying her family. Later in her mother’s life, Virginia lovingly served as her caretaker. Virginia was the devoted wife of 68 years to Gene C. Holcomb, loving mother of Gayle A. Holcomb of Perry Hall, MD, Cheryl A. Swehla (Robert) of Havre de Grace, MD, and Lisa S. Holcomb of Belcamp, MD. She was the adored grandmother of Dr. Brian P. Swehla (Kristan) of Hydes, MD, Rebecca A. Hendrich (Russell) of Easley, SC, Sarah G. Swehla of Pittsburgh, PA, Amanda B. Lee (Paul) of San Diego, CA, and Susan E. Swehla of Havre de Grace, MD, and fond great-grandmother of Lily, Owen and Olivia Swehla; Nicholas and Zachary Hendrich; and Evelyn, Audrey and Isabel Lee.
While Virginia lived the majority of her years in the Carsins Run and Churchville areas, her lifelong love was Havre de Grace. She enjoyed sharing memories of her town with everyone she met. One hardly had a conversation with her where Havre de Grace was not mentioned. Until her illness, Virginia was a member of the Havre de Grace Young At Heart club. As an avid collector of Lu-Ray Pastels and decorative glass especially coin, she could be seen around Havre de Grace scavenging the many antique and collectible shops. Virginia was a member of the Oak Grove Baptist Church.
A visitation will be held on Saturday, June 13, 2020 , from 10 A.M. to 11 A.M. at the Zellman Funeral Home, P.A., 123 S. Washington Street, Havre de Grace, MD, where funeral services will be held at 11 A.M. Interment will be held at Harford Memorial Gardens, Aberdeen, MD. Live streaming available at Zellman Funeral Home, P.A. Facebook page for all services. Pallbearers will be Robert Swehla, Brian Swehla, M.D., Russell Hendrich, Sarah Swehla, William Ervin, and Glenn Holcomb, and USNPO2 Paul Lee will serve as an Honorary Pallbearer.
The family wishes to express their unending gratitude to Amedisys Hospice, for the loving care of Virginia.
In lieu of flowers, donations may be made to the Salvation Army, 300 Rear Seneca Ave., PO Box 309, Havre de Grace, MD, 21078-0309. Messages of condolences and memories to share can be made on-line at www.zellmanfuneralhome.com.