To share your memory on the wall of Earle Cornelius, sign in using one of the following options:

Provide comfort for the family of Earle Cornelius with a meaningful gesture of sympathy.

Born in Lewisburg on March 12, 1922, he was son of the late Earle D. and Anna VonNeida Cornelius. He was the husband of the late Barbara L. Cornelius, whom he married in 1949.

A 1939 graduate of Lewisburg High School, he was a member of the school’s state championship soccer team. Following graduation, he attended Bucknell University. In World War II, he enlisted in the U.S. Army, took engineering courses at Yale University and joined the 82nd Airborne Division as a member of the 307th Combat Engineer Battalion. He took part in the Battle of the Bulge, placing explosives on a bridge in Trois Ponts, Belgium, that helped blunt the German advance.

He was employed by the U.S. Postal Service, serving with the Railway Postal Service before becoming a rural mail carrier in Winfield. He later served as a field representative with the American Heart Association and as regional director of Keister-Williams Newspaper Services, which was awarded a Freedoms Foundation Award during his tenure.

He was a leader in the Boy Scouts of America and oversaw two Scouting expeditions to Philmont Scout Ranch in New Mexico. He also was a soccer official.

An avid golfer, he was a member of the Bucknell Golf Club for more than 50 years.

He was preceded in death by a brother, William Cornelius, and sisters Nancy Goff, both of Lewisburg, and Dorothy Burris, Northumberland.

A life celebration will be held from 1-2:30 p.m. on Sunday, Sept. 29, in the Baylor conference room at the Best Western Plus Country Cupboard Inn, 7701 West Branch Highway, Lewisburg. Interment will follow at Winfield Cemetery.

We encourage you to share your most beloved memories of Earle here, so that the family and other loved ones can always see it. You can upload cherished photographs, or share your favorite stories, and can even comment on those shared by others. 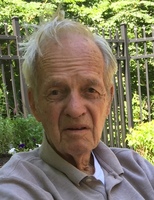