To share your memory on the wall of Edward Dolan, sign in using one of the following options:

Receive notifications about information and event scheduling for Edward

You will receive any future notification messages.
No funeral details available.

We encourage you to share your most beloved memories of Edward here, so that the family and other loved ones can always see it. You can upload cherished photographs, or share your favorite stories, and can even comment on those shared by others.

Posted May 11, 2020 at 09:13pm
A true friend to my mom.... Loved hearing all His years of experience shared through story telling sitting in the back yard or front porch. I always looked forward to his return from fishing. He shared his catch for the day... To see him laugh while the kids were growing up and playing in the back yard was priceless. And always he would ask you, "How are you doing today?" A gentle spirited man whom you never got enough of his company. Will miss you Mr. Ed.... Love, Violet.... Gladys daughter....
Comment Share
Share via:
KP

Posted May 06, 2020 at 08:34pm
Eddie was a wonderful man. I never heard him say a harsh word about anyone. The world lost a true gentleman.
Kathy Morrison Perrett 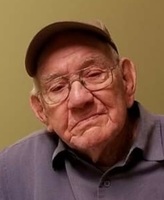