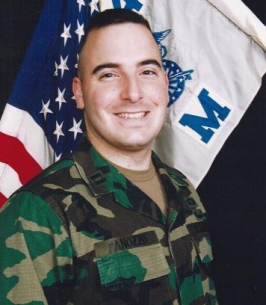 Paul R. Panozzo, Sr. of Havre de Grace, MD passed away on June 10, 2022. He was 51. He was the devoted husband of Lisa L. (Totten) Panozzo for 25 years and loving father of Lauren and Paul, Jr.
Mr. Panozzo was born in Chicago, IL to the late Richard Panozzo and Linda Jacobson, brother of Cathi (Dan) Lyons and Brian Panozzo. He is survived by many nieces and nephews.
Paul was commissioned as a 2nd lieutenant in the US Army in May 1993 and served his country in various assignments around the world until he retired as a Major in 2013 where he still served the government in a contracting position. He had a gift for telling stories and could make the most stoic laugh. He loved God, his country, his family and tinkering around the house and vehicles until FTD (Frontotemporal Dementia Disease) took his abilities away.
A memorial service will be held at Zellman Funeral Home, P.A., 123 South Washington St., Havre de Grace, MD, on Saturday, June 18, 2022 from 12 P.M. to 2 P.M., where a service will be held at 2 P.M. Inurnment at Arlington National Cemetery will follow at a later date.
In lieu of flowers, the family requests Memorial Donations in his honor to be made to the Hospice Team at Perry Point VA Medical Center, 361 Boiler House Road, Building 361, Perry Point, MD 21902-1103 or The Association for Frontotemporal Degeneration (AFTD), 2700 Horizon Drive, Suite #120, King of Prussia, PA 19406.
Messages of condolences or memories to share may be made to memoriesofprp@gmail.com and www.zellmanfuneralhome.com