To share your memory on the wall of Margaret Holmes, sign in using one of the following options:

Receive notifications about information and event scheduling for Margaret

We encourage you to share your most beloved memories of Margaret here, so that the family and other loved ones can always see it. You can upload cherished photographs, or share your favorite stories, and can even comment on those shared by others.

Posted Mar 17, 2020 at 08:10am
3/17/20
Dear Sally,
The day that Peg died was the 91st anniversary of her uniting with Natrona Heights Presbyterian Church! This is to me an interesting occurrence. I thought that you and the family might want to know! Others recently who lived more than 100 years from NHPC include: Agnes Hine, Martha Low Lace, Edna Jones, Margaret Elsenrath, and Mary Bovard. Peace be with you!
Cam Malcolm
Comment Share
Share via:
BW

Posted Mar 16, 2020 at 03:26pm
Dear Sue and family,
I am sorry for the loss of your grandmother. She was so funny. She saved me so many times with alterations for my daughter's
dresses for prom or any other formal dances at school. My mother will miss her letters that she wrote to her, last one was at christmas. I will always remember the summers you came for two weeks at her house. All the crazy games we played in the basement with all the neighbor kids. Those were good times. Everyone wanted to be like her when they got older with all the activities she did through the community and still doing it until a short time ago.
Comment Share
Share via:
RM

Posted Mar 16, 2020 at 08:54am
3/16/20
Dear Sally & family,
I am celebrating the life of Mrs. Holmes. She is a terrific individual and I enjoyed being her minister for 30 years. Living to be 106 is remarkable - but then again, she is a remarkable person. I have missed her - but she joins many from NHPC in the church triumphant - including the centennial club of many women who achieved a century or more of life! She was loved by me and many others. Take care of yourself and I hope all things go well for you and yours.
Rev. Cam Malcolm
Comment Share
Share via: 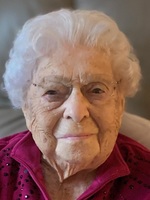