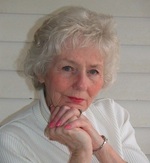 Mary Patricia Greer nee Short was born February 15, 1927 in Philadelphia Pa as an only child to Mary Carroll (d) and Frank Short (d). Spending much of her time at Catholic boarding school while her parents traveled, she vowed to have a large family so she would never be alone. Little did she know how true that would be.

While attending the College of Chestnut Hill, she met a handsome University of Maryland football player, Bill Greer. Bill was a hard-headed Presbyterian who loved the racetrack, card playing and country cooking and was a consummate gentleman. The city girl and the country boy fell in love and were married in 1948.

Pat and Bill went on to have eight children together--four boys and four girls. The two were married for 53 years before Bill’s death in 2001. They enjoyed their life together to the fullest and created many great memories. Their love for each other lasted a lifetime.

Later known to everyone as Grandmom, her greatest joy was her children, grandchildren, and great-grandchildren. Even at 94, she remembered all of her kids and grandkids’ birthdays and always made sure to send a card or a gift- even if it was a month late. Her Christmas parties were legendary complete with Santa Claus and gifts for everyone.

Grandmom loved to travel. She visited Ireland, her family’s homeland, many times. One of her favorite places to visit was Medjugorje, a small town in Bosnia and Herzegovina. The Balkan village is the site of many appearances of the Virgin Mary. Grandmom’s profound faith was stirred during every visit to the holy site. She brought many of her children with her on her trips and sent every grandchild a book on Medjugorje.

Grandmom was known for her distinctive style of bright and pastel colors and she absolutely loved to shop. No one at her age could match her colorful Lilly Pulitzer looks.

Grandmom lived her life with love, patience, a great sense of humor, and a deep Catholic faith that she instilled in her children. Her final days like her life were filed with love.

Also survived by 26 grandchildren and 30 great-grandchildren, Grandmom was never alone even til her last breath.
A Mass of Resurrection will be held on Thursday, April 29, 2021, at 9:45 AM, at St. Patrick’s Catholic Church, 615 Congress Avenue, Havre de Grace, MD 21078. Interment will be held at Bel Air Memorial Gardens.
In lieu of flowers, contributions may be made to St. Patrick's Catholic Church in her memory.
Online condolences may be made at www.zellmanfuneralhome.com.