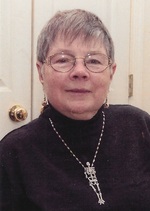 Patricia Joan Pollmann
Patricia was born on April 9, 1933 at St. Luke's Hospital in Morningside Heights, Manhattan, NYC. Her parents were Henry Pollmann and Christine (Hansen) Pollmann. She was the second eldest of four sisters - Marie, Patricia, AnnLou, and Christine. Her elder sister Marie died of a bacterial infection at the age of five, just a year before Penicillin was released.
Patricia grew up in a household in Morningside Heights and attended Corpus Christi primary school. She showed an early talent for graphic arts and illustration. Her father, Henry, was librarian for the Appelate Division of the Supreme Court of New York. Her mother, Christine, was a librarian at Columbia University.
Patricia began her secondary education at Blessed Sacrament School in West Harlem, NYC. Then, her family moved to Jackson Heights in Queens, NYC and Patricia finished her secondary schooling at the School for Industrial Arts, receiving a diploma in Graphics Design.
Pat's sister, AnnLou went on to Marymount University receiving a degree in Education. She undertook some teaching positions at a primary school in West Harlem. AnnLou became engaged to Ronald Tobin, a PhD candidate in French Literature at Princeton University. While on a Fulbright scholarship, they married in Lisle, France. After their return, Ron finished up his degree and ultimately wound up as Professor at the University of California, Santa Barbara where they live to this day.
Pat's sister, Christine became a student at Hunter College in Manhattan. During this time she met Lt. William Mermagen and they became engaged and then married at St. Joan of Arc Church in Jackson Heights, Queens, NY. Patricia was the maid of honor.
After receiving her diploma from SIA, Patricia engaged in some free-lance work for several Wall Street brokers (1951 - 1953). Pat then received a position as Graphics Designer with the Colgate Palmolive Company at 300 Park Ave, NYC. There she stayed until her retirement in 1984.
After Pat's retirement, she moved to Maryland where she lived in various residences in Havre de Grace until finally moving in with the Mermagen family in Webster Village, Havre de Grace. The walls of her apartment are covered with her paintings and artwork. She never exhibited them but are wondrous to behold by the visitors who have come to see her.
Pat passed away peacefully at the age of eighty-seven. She is survived by her sister AnnLou, and her sister Christine.