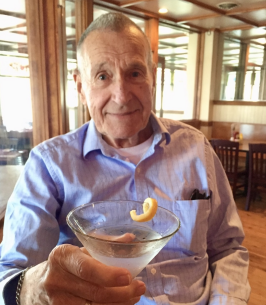 Mr. Wood was born and raised in Lapidum, MD, to Ernest Herbert Wood and Clarice Price Wood. He graduated from Havre de Grace High School 1947. Upon graduation, he joined the Army Air Force and served 4 years in the Korean War in K-2 Area. After his discharge, he worked at Patuxent Naval Station for 5 ½ years testing aircraft armaments.

In 1960, Bob started his own construction company called Har-Ce Inc. and worked primarily with government contracts. Because he had his pilot’s license which he earned after only 5 hours time, he was able to fly to military bases for his company. He loved flying and sailing and did a lot of both. In 1986, he built a 64ft, all-steel sailboat. It was the first sailboat to circumnavigate the Americas, initially named “Hummer” and was renamed “Ocean Watch”. He also built his own seaplane. He enjoyed building and construction and in his later life he built model airplanes. He loved going out to dinner and watching the boats go by at his home.
Bob was a member of Havre de Grace United Methodist Church, American Legion Post 47, Havre de Grace Maritime Museum, Past Master of Masonic Lodge 130, and Har-Ce Forest 142.

Bob is survived by his wife of ten years Jeanne Betty Bulger, his beloved daughters Jessica and Kristina and their husbands Myles Yost and Michael Worton, his second wife and mother of his children Jane Stapleton, and Terry Gobble who came to live with him at the age of 16. He was predeceased by his siblings, and his first wife, Helen Bagley, and Douglas Anderson, whom he and Helen raised together.

In lieu of flowers, contributions may be made to Heart Research at the University of Maryland School of Medicine and the Fisher House Foundation.
Online condolences may be made at www.zellmanfuneralhome.com.