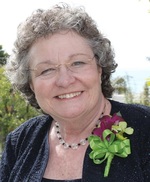 Sharon S. Lawson, of Havre de Grace, MD, passed away on May 2, 2019 surrounded by her family. She was married 54 years to the late Charles E. Lawson, Jr.

Mrs. Lawson was born in MD, to the late Morris and Mildred Smith. She grew up in Howard County, graduating from Howard High School, and then later settled with her family in Havre de Grace, MD. She was the loving mother of Charles Lawson, III and his wife Heather and Jennifer Lawson Bepple and her husband Chad. She was the adoring grandmother of Tessa and Hannah Lawson, Victoria, Scott and Kaitlyn Bepple. She is also survived by her sisters Shirley Adams and Dixie Miliner and many nieces and nephews.

Mrs. Lawson received her Master’s in Social Work from the University of Maryland. She worked and retired from the state of Maryland as a social worker after 30 years. She then continued as a social worker at the Aberdeen Proving Ground for another 10 years. Mrs. Lawson was an active member of the Grace United Methodist Church in Aberdeen, MD. She has volunteered countless hours for a variety of organizations including Meals on Wheels.
A memorial visitation will be held Wednesday, May 8, 2019, from 11 A.M. to 12 P.M. at the Grace United Methodist Church, 110 W. Bel Air Avenue, Aberdeen, MD 21001. Where a memorial service will be held at 12 P.M. Officiating will be Dr. Bob Clipp.

Messages of condolences may be made to www.zellmanfuneralhome.com