To share your memory on the wall of Hall Laye, sign in using one of the following options:

Provide comfort for the family of Hall Laye with a meaningful gesture of sympathy.

Randy served his country admirably with the United States Navy from 1966-1970 during the Vietnam War. He retired from Cytec Industries after 52 years of service and was heavily involved in the local Union for 40 +plus years. He loyally served as the Union President for 1 term and as Vice President for 25 years for the local 1338.

Randy was an avid Ravens and Orioles fan. He enjoyed gardening, yardwork, and found much joy in coaching little league for his sons when they were younger. His children will miss him dearly.
Read Less

We encourage you to share your most beloved memories of Hall here, so that the family and other loved ones can always see it. You can upload cherished photographs, or share your favorite stories, and can even comment on those shared by others.

Posted Aug 13, 2019 at 09:18pm
Please accept our most heartfelt sympathies for your loss our thoughts are with you and your family during this difficult time.

Flowers were purchased for the family of Hall Laye. Send Flowers

Posted Aug 13, 2019 at 09:31am
Randy shared so much wisdom with me about being a union rep. He took up for me several times when things got rough. He always had my back. We went through many negotiations together and he always was someone to look to for answers. It's hard to think what our world at work would have been like without him. I will miss him , as will a workplace full of people that always looked up to him. RIP my friend
Comment Share
Share via:
LM 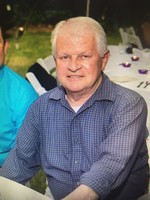