In Memory of
Jamie Glen
Morgan
1974 - 2018
Click above to light a memorial candle.
Memorial Candle Tribute From
Zellman Funeral Home, P.A.
"We are honored to provide this Book of Memories to the family."
View full message >>>
Send Flowers
Menu

In the event that there is an error
in the information presented,
please contact the funeral
home by clicking here. 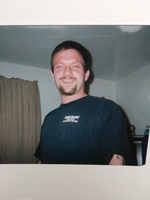 Jamie Glen Morgan of Aberdeen, MD passed away on Sunday, February 18, 2018. He was 43 years old. He was the husband of Pamela S. (Eller) Morgan.
Jamie was the son of Rachel (Griffith) Jarrell and the Late John M. Morgan, Sr. He was the father to; Jamie L. Morgan, Courtney D. Morgan, Callie R. Morgan, Devin G. Morgan and Richard E. Stacey, II. He was the grandfather of Kendra L. Rivera, Michael R. Rivera, Jr., Peyton M., Dreyson C. and London A. Simon. He was the brother of Angela Chagnon and was predeceased by John and Sandra Morgan.
Jamie was a collector of knives, cars and was an avid NASCAR and Redskins fan.
A visitation will be held on Sunday, February 25, 2018 from 12 P.M. to 2 P.M.
Messages of condolences may be made to www.zellmanfuneralhome.com